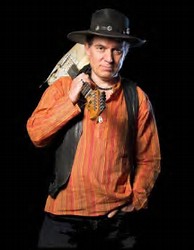 Mega talented and hugely entertaining, Robin has a reputation as one of the UK’s top blues/rock guitarists and having paid his dues as a session man with such artists as:

Highly regarded as a musician’s musician – hardworking and seemingly ubiquitous- Robin Bibi is a well-established name, on the Uk Blues music circuit – perhaps not as well-known as he deserves to be – but with a reputation for excellence, both as a guitarist and as a singer and entertainer.

As an electric guitarist, he can do SRV better than almost anyone – but he can do a lot more than that – soul, funk, jazz, swing, even a touch of gospel and Rockabilly!!! But as he says – ‘the blues is always there – everywhere you go’.
One of our most popular acts over the years, this band guarantees a great evening of live music – don’t miss it.
We start at 4.30pm and the door charge is £12.